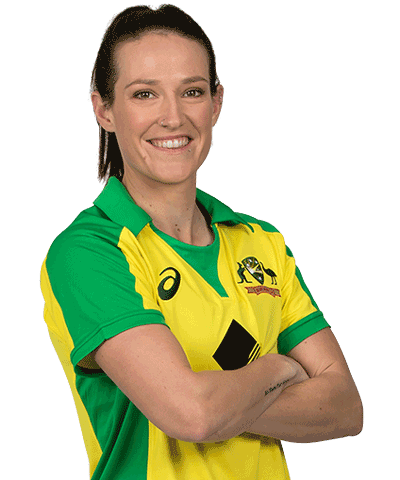 Regarded as one of the world’s best fastest bowlers, Megan Schutt is the mainstay of the Australian Women’s Cricket Team and has held the top spot in the ICC’s T20I Bowling Rankings.

The first Australian woman to take a T20I hat trick, Schutt’s continues to perform at a high level for the Strikers.

Megan was Adelaide’s WBBL|02 Most Valuable Player with 12 scalps while maintaining the best economy rate of any Strikers bowler for the tournament. She is currently the club’s all-time leading WBBL wicket-taker.

Schutt made her international debut against New Zealand and that year was rated by ESPNcricinfo's review of women's cricket in 2012 as a player to watch in the following year, leading to her selection for Australia's squad for the 2013 Women's Cricket World Cup.

In June 2015, she was named in the Australian touring party for the 2015 Women's Ashes in England.

In March 2018, during the 2017–18 India women's Tri-Nation Series, Megan became the first bowler for Australia Women to take a hat-trick in WT20Is. In the same year, she was named as the new captain of the South Australian Scorpions.

In October 2018, she was named in Australia's squad for the 2018 ICC Women's World Twenty20 tournament in the West Indies. The same year also saw her named in the Adelaide Strikers' squad for the 2018–19 Women's Big Bash League season.

In June 2019, Cricket Australia named her in Australia's team for their tour to England to contest the Women's Ashes, and later in the same year, Megan became the first Australian bowler to take a hat-trick in WODIs, and the first female bowler to take two hat-tricks in international cricket in the third match against West Indies.

In January 2020, she was named in Australia's squad for the 2020 ICC Women's T20 World Cup in Australia, finishing as the leading wicket-taker with 13 wickets in the tournament which also included taking 4/18 in the final.

In May 2021, Megan announced that she and her wife Jess Holyoake will be expecting their first child.