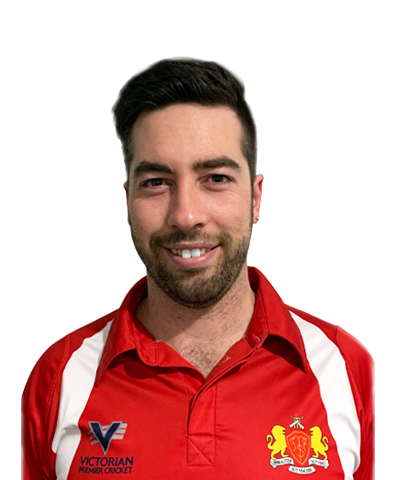 Nathan Lambden is a cricketer who plays for Premier Cricket Club, Casey South Melbourne, and has previously represented Dandenong Cricket Club & Victoria in the Under 23’s Futures League competition.

Nathan begins his 6th season with the Casey-South Melbourne Cricket Club for the 20/21 season with a goal of going deep in the finals, whilst working on his craft with both bat & ball.

Lamby has recorded a 69 not out whilst playing for CSMCC, with the best bowling of 7/65 and has earmarked this year's goals of a Club Championship and Premiership.

Early in his career, state high-performance coaches put Nathan into the squad after an outstanding first Victorian Premier Cricket season with Casey-South Melbourne. After switching from Dandenong, Nathan Lambden led a new-look team, finishing up with 29 wickets for 2015/16 season at 20.7.

During that time, he was also called up to the Victorian Premier Cricket side, taking on the Melbourne Stars in an exhibition T20 game at Casey Fields.  This opportunity gave Nathan the opportunity at the elite level and a chance to impress through the Bushrangers’ pathway.

“It was pretty good – I got an email last week about it and was pretty stoked and pretty surprised to be honest as there’s a lot of good cricketers out there. I had a pretty good year and there’s still a few things I need to work on and improve on and I’ve worked extremely hard to get to where I have now."