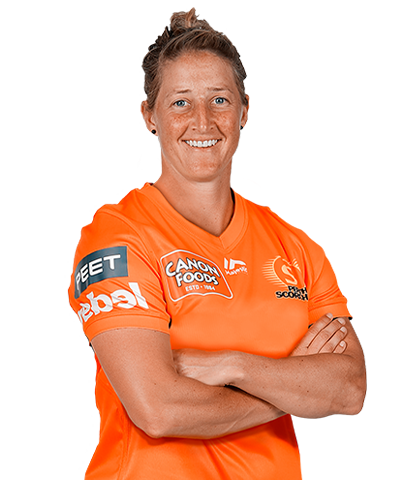 Sophie started playing organised cricket when she was five and was first selected to play for Wellington Blaze when she was just 14. When she was selected in the White Ferns's squad in 2006, the then 17-year-old was one of the youngest ever members of the side.

The allrounder gave New Zealand an incredible start to their 2013 Women's World Cup campaign, smashing 145 off 131 balls and securing a 150-run win over South Africa.

Sophie Devine has also represented New Zealand in hockey as a member of the Black Sticks hockey team and has proven to be a valuable member of the SA Scorpions' line-up.

In a match against India in 2015, she broke the international record (men and women) for the fastest T20I half-century, taking just 18 balls to achieve the feat. Her habit of breaking records continued well into the 2017 Women's World Cup, where she hit 9 sixes in a game against Pakistan to become the first woman to do so in WODI cricket.

The Kiwi has also been an absolute superstar for the Adelaide Strikers in the WBB. Sophie became the club's first-ever cricketer, male or female, to reach 1,000 Big Bash runs, also topping the charts for maximum sixes in the tournament's history.

After moving to the Perth Scorchers for the WBBL06 season, Sophie Devine captured the WBBL Player of the Tournament for the second time.

16.01.2020 - Sophie named Captian of the New Zealand "White Ferns" National Women's cricket team, taking over from Amy Satterthwaite taking time off due to her first child.

10.02.2020 - Sophie rewrites the record books, as the White Ferns captain becomes the first person, male or female, to notch up a fifth successive T20 international half-century.

23.02.2020 - Sophie Devine posts her 6th consecutive score of 50 or more in T20 International cricket, as she leads the White Ferns to a win over Sri Lanka in T20 World Cup opening round.

03.06.2020 - Sophie Devine joins India’s Jemimah Rodrigues in the 4th episode of 100% Innovation, an amazing 100% Cricket focussed webinar series, sharing their ideas in supporting the growth of women’s cricket at both a local and national level.

24.11.2020 - Sophie Devine has been named Player of the Tournament for WBBL06. This will be the second time she has won the award, as she goes back to back with both the Perth Scorchers and Adelaide Strikers.

26.11.2020 - Sophie Devine heads a strong list nominated for the Women's T20I Cricketer of the Decade, including Meg Lanning, Elyse Perry and Alyssa Healy of the Australia squad, Anya Shrubsole from England and Deandra Dottin from the West Indies.