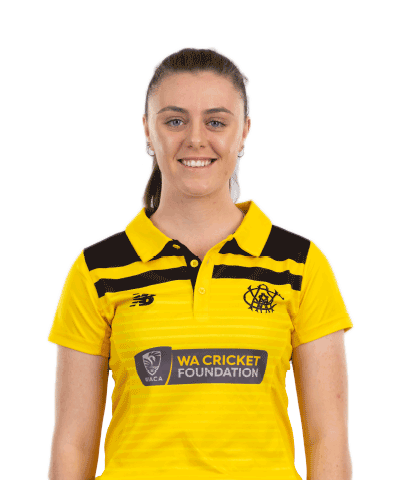 Originally from Queensland and growing up in Port Hedland, Zoe Britcliffe is a country girl now living in Perth and playing for the WA Women’s team.

Zoe’s first sporting dream was to be a swimmer, then a softball player. It wasn’t until 2015 when she was asked to fill in for a boy's country team did she realise that she could play. Her previous experience only being a tennis ball and a 10m pitch of synthetic grass and concrete that was her family’s backyard.

The first club she joined was the Wanderers Cricket Club, a men’s club, at the age of 14 where she spent two seasons playing. She then moved to South Perth Cricket Club where she has played since.

Having caught the attention of the female programs at WA Cricket, Zoe made the decision to move to Perth and attend boarding school to give herself better opportunities in the female game.

She represented WA through the pathways levels over five seasons before earning her first professional contract in the WNCL for WA in the 2020/21 season.

Away from the game, Zoe has her own business and works in and out of schools and coaching roles while also exploring many other hobbies and passions including reading, personal development, financial education and mindfulness.