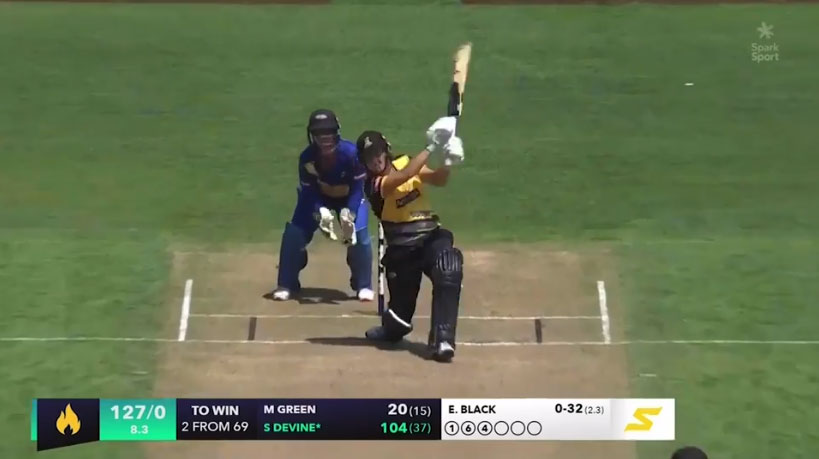 Women's T20 cricket history has been made with our very own Sophie Devine blasting an unbeaten 108 off 38 balls to etch her name into the history books.

During a game between Wellington Blaze and the Otago Sparks, Sophie bombarded the boundary (and the crowd) with 9 fours and 9 sixes, with one 6 getting a little too close for comfort for one young girl in the stands.

As the consummate professional, Devine went out of her way after the game to check on the youngster, who was already sporting an ice pack, to join in for a selfie and some playing gear to cheer her up.

It was a nervous time before the game, as it had been almost 2 months since she played her last game.

“Whenever you have an extended break away for the game, you get nervous about ‘Can you come back into it?’ so it was nice to spend some time in the middle and get a few out of the screws.

“For me it was just about playing smart cricket”

“To know where my gaps were, trying to manipulate the field ... I felt I knew where they were trying to bowl so if I could manipulate myself around the crease, open up areas of the field so yeah, pleased with the way it went today

“I think sometimes I get a little bit carried away ... I get a bit over-eager and play some rash shots, so it was nice to stick to some decent cricket shots today and finish the job.”

The record-breaking affair wasn't without its scares when in only the first over, the 3rd umpire was unable to clearly see if Devine had been runout. Only 9 men have taken less to compile a T20 hundred in fewer balls, clearly highlighting what an accomplishment it is.

From there, both Devine and Blaze captain, Maddy Green, amassed the necessary runs off 8.4 overs, easily putting their opponents away. With four wins from five games, the defending champions are looking the goods to take out the Super Smash competition.