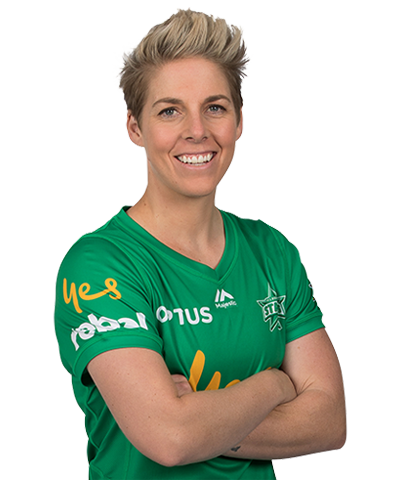 Elyse Jayne Villani (born 6 October 1989) is an Australian cricketer who plays for the Australia national women's team. She also plays domestically for Victoria in the Women's National Cricket League (WNCL) and the Melbourne Stars in the Women's Big Bash League (WBBL).

Top-order bat Elyse Villani’s clean hitting and impeccable timing have seen her grow into one of the most damaging batters in international women’s cricket.

Villani has enjoyed great success with the Australian Women's cricket team, helping them to lift the ICC Women’s World Twenty20 trophy in the West Indies in 2010.

Upon her return to Australia, Villani’s dedication and hard work paid off as she recorded one of her most dominant domestic seasons. Her standout performances for the Commonwealth Bank VicSpirit led to a return to the national side in 2013.

Villani was recalled to the Australian Women's cricket team for the ICC Women’s World Cup in India, a title which the team claimed. She was rewarded for her consistent performances throughout the season with a national contract for the following international season.

After missing out on the ODI series against Pakistan in 2014, Villani returned for the T20I with a bang, leading the series run-scorers with 181 runs at an average of 60.33 and a strike rate of 126.57 across four matches.

She helped Australia win back the Ashes from England in 2015, before a move to the Western Fury and Perth Scorchers for 2015-16. In 2018, Villani was an integral part of the Australian Women's cricket team, which went all the way to win a fourth ICC World T20 championship.